Midship Pipeline Company, LLC (“Midship”) is developing a natural gas pipeline project to create new firm transportation capacity of up to 1,440,000 Dth/d connecting new gas production from the emerging STACK and SCOOP plays in the Anadarko Basin in Oklahoma to growing Gulf Coast and Southeast markets via deliveries to existing pipelines (“Midship Project”).

The proposed Midship Project will include new-build mainline pipeline as well as three compressor stations, two lateral pipelines with a booster station and associated facilities.

The new-build facilities will include a total of three mainline compressor stations, seven receipt meter stations/taps and four delivery meters. In addition, the following two laterals will also being constructed:

- Chisholm Lateral – approximately 20 miles of 30-inch-diameter new-build pipeline that will begin at the Chisholm Processing Plant in Kingfisher County and end on the mainline of the Midship project near Okarche. 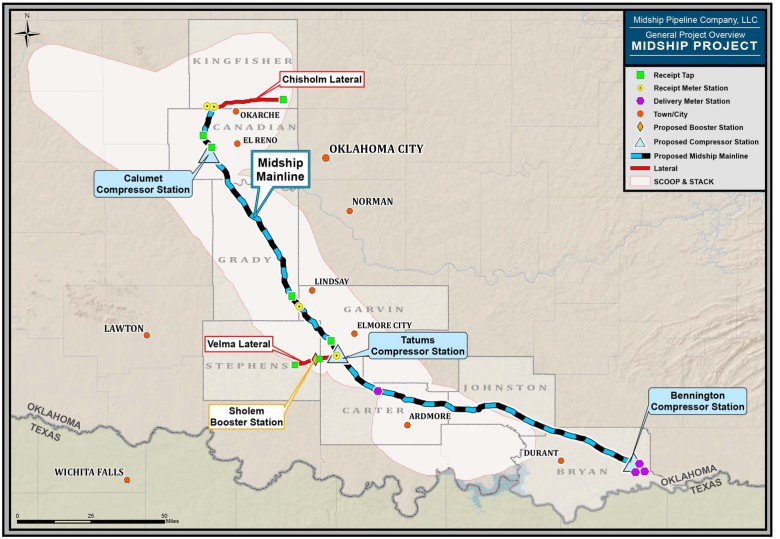 The Spire STL Pipeline will interconnect with the existing Rockies Express Pipeline in Scott County, Illinois. The planned route includes 65 miles of steel underground pipeline running through Scott, Greene and Jersey counties in Illinois and St. Charles and St. Louis counties in Missouri.

The original comment period was to close on September 29th, 2017, and the Federal Energy Regulatory Commission's final decision was to be requested on December 28th, 2017 after the 90-day review period.  On November 22nd, 2017, FERC released a statement which stated "...delivery of the...Environment Assessment (EA) was delayed and as a result some stakeholders did not receive a copy of the EA until after the comment period was closed....it is important we receive your comments in Washington, D.C. on or before December 22, 2017." 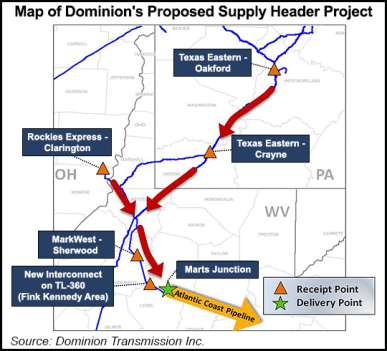 Dominion Energy Transmission, Inc. is proposing to construct and operate approximately 37.5 miles of natural gas pipeline and modify existing compression facilities in West Virginia and Pennsylvania. The project, referred to as the Supply Header Project (SHP), will provide natural gas supplies to various customers, allowing the transport of natural gas from supply areas in Ohio, Pennsylvania and West Virginia to market areas in Virginia and North Carolina. 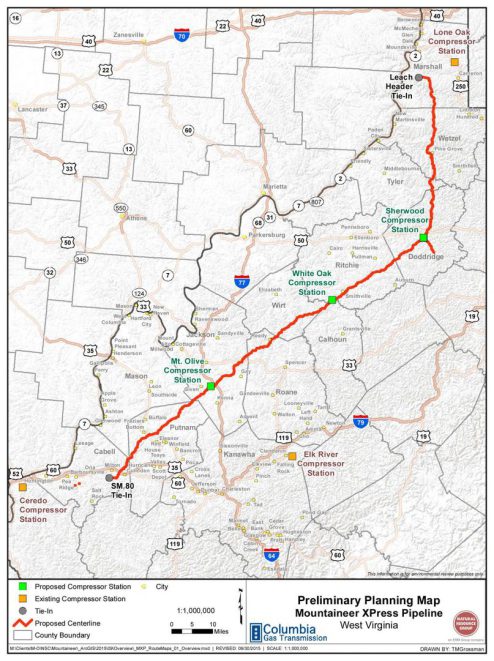 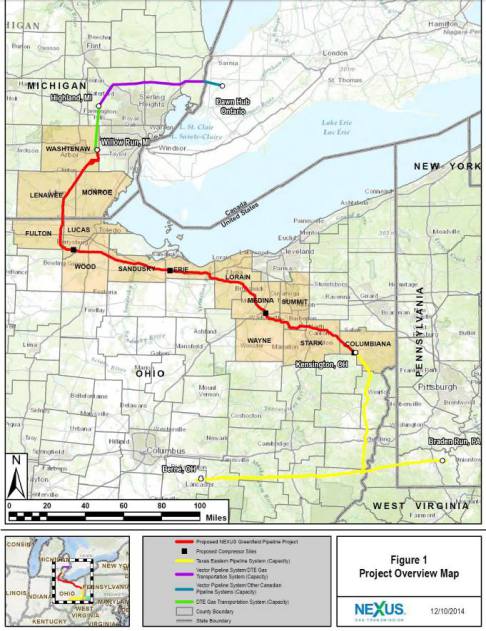 Spectra Energy’s NEXUS Pipeline, a $2 billion, 255-mile interstate pipeline that will run from Ohio through Michigan and eventually to the Dawn Hub in Ontario, Canada, continues to build support and a good head of steam. In July the Federal Energy Regulatory Commission (FERC) issued a favorable draft Environmental Impact Statement for the project, a sure sign that FERC intends to approve it (see Spectra’s NEXUS Pipeline Gets Favorable Draft EIS from FERC). Earlier this week MDN reported the Ohio Environmental Protection Agency has granted air emissions permits to NEXUS so they can build five compressor stations (see OH EPA Grants Permits for 5 NEXUS Pipeline Compressor Stations). Even more good news: MDN has exclusively learned that Columbia Gas of Ohio (CGO) has signed a long-term contract to ship 50,000 decatherms per day (50 million cubic feet per day) of natural gas along the NEXUS from two points in Ohio and Pennsylvania to a point in Sandusky County, OH. This new agreement appears to be a shift in strategy by Spectra. How? CGO is a natural gas utility company–delivering gas to end users like residences and businesses. In industry parlance CGO is an LDC, or “local distribution company.” Much of the focus by the media on NEXUS has been that gas flowing through the pipeline will end up exported to Canada.